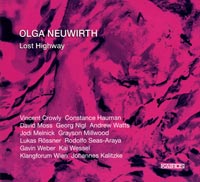 Description: As has now been well documented even through mainstream news channels, Neuwirth's work is an opera based on a film, David Lynch's disturbing and ambiguous noir study of psychogenic fugue, murder, madness and lost identity. The opera follows the basic storyline of the screenplay with episodes and dialogue adapted but basically unchanged; a man may have murdered his wife and may be living in a fantasy state in which he is a more potent version of himself and may also have killed an obscene authority figure; the character's lack of control of his impulses, motivations and actions is the central theme here as in the original. Musically the piece relies heavily on declamatory dialogue (a good deal of it spoken) with harshly discordant accompaniment from the ensemble and a sense of underlying menace heightened by the use of formless, spatially conceived electronic sounds (the music is unrelated to the collage of popular styles employed to devastatingly surreal effect in the film). In a sound-only recording the opera seems less disjointed, more of a conventional narrative than the film but unusual derivation notwithstanding and taken on its own terms the story and subject-matter certainly provides an appropriately involving basis for a nightmarish piece of modern theatre. 2 CDs. Libretto included. Constance Haumann (soprano), Georg Nigl (baritone), Vincent Crowly, David Moss (voices), Klangforum Wien; Johannes Kalitzke. SACD hybrid.