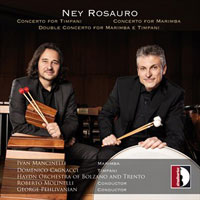 Description: It would be inaccurate to classify these gorgeously colorful, irrepressibly vital concerti as "light music", though they are the reverse of "heavy" in any sense. The last time we had this much sheer fun with concerti for unusual soloists was probably 09Q084. If you enjoy Milhaud's Brazilian-influenced compositions, then Rosauro provides a treasure-trove of the same sort of thing (and from a more "authentic" source, if that matters). The hugely enjoyable Timpani Concerto is unabashedly popular in style, though sophisticated in content and execution. The first movement is a Bach pastiche in the style of an energetic baroque fugato with a brief slower interlude (and yes, the composer did subtitle it "Bachroque"). The second is tender and lyrical, with a gently yearning melody which the timpani play as movingly as the strings. The finale begins with a virtuosic introduction by the soloist, introducing a boisterous ragtime-hoedown to end the piece in energetic high spirits. The 1986 Marimba Concerto is somewhat more harmonically adventurous, though some of its "popular" melodies are paradoxically closer to flirting with lounge music than anything in the timpani concerto. However, the theme of the "Lamento" slow movement is serious, touching and gently elegiac. The influence of Brazilian popular music, both rhythmically and modally, is also more strongly present. The marimba being the composer’s primary instrument, the work is unsurprisingly a tour de force of virtuosic four-mallet technique. The first movement, "Salutation" begins with a post-minimalistic pulse, followed by an episode of space age bachelor pad music. After the lovely melancholy of the Lament comes a fleet-footed balletic sequence of Dance variations. The finale "Farewell" abounds in Brazilian rhythms in a mood of emotionally dramatic "saudade", and of course a sparkling cadenza precedes the final, emphatic recapitulation. In both concerti that feature the timpani, Rosauro fearlessly demands fully chromatic melodic playing, in the Double Concerto duetting with the marimba on its own terms, thus requiring a level of pedalling technique more commonly associated with organists! The first movement presents the main theme of the concerto in an Adagio introduction, followed by a lively allegro, tinged with Brazilian folk modes and featuring breathtaking high-velocity imitative counterpoint between the nimble soloists. A sad rendition of the main theme on cor anglé opens the songlike slow movement, soon adopted by the marimba and passed around the orchestra, which finally comes together in a lush neo-romantic tutti presentation of the theme. The third movement, a kind of steady but propulsive scherzo, was inspired by the Spanish pilgrimage route Camino de Santiago de Compostela. Over an ostinato accompaniment that segues into a livelier fugato, a folk-like tune emerges from afar, swells to a dramatic climax, and recedes into the distance. The soloists take turns with the theme, and join forces in a cadenza that leads directly into the joyful finale. This Brazilian fiesta explodes with exuberant high spirits; the soloists get a final cadenza in which to show off with variations on the main theme, and the orchestra join in again for an irrepressible romp to the finish. Ivan Mancinelli (marimba), Domenico Cagnacci (timpani), Haydn Orchestra of Bolzano and Trento; Roberto Molinelli, George Pehlivanian.