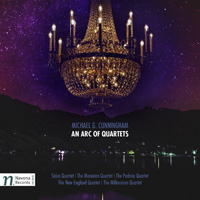 Description: The title of this recording as a whole is 'An Arc of Quartets', and that pretty accurately describes the trajectory of the evolution of the composer's style as described by this series of (unconnected) works spanning the years 1959 to 2005. The First is very tonal, consisting of two movements comprising three distinct sections. It, and Three Satires could easily be by a British tonal composer of the mid 20th century. The 'satire' is of various 1960s musical trends, but the whole is a serious and cohesive quartet structure. With the Third, the composer moves into territory that is more harmonically acerbic, due in no small part to a much greater emphasis on dense linear counterpoint that to a considerable extent lets the harmony come out as it may, as consonant or dissonant as dictated by the independent lines' progress. No.3 constructs four more or less conventionally planned movements by varying the instrumentation, pitch and character of instrumental lines presented in the first movement. No.4 takes this approach further, with densely interwoven, intermingled lines - Interlacings - vying for attention throughout. The fifth, Aggregates, is more harmony- and rhythm-based; the composer also explores timbre - trills, glissandi - more extensively than in the previous works. A sense of melody and accompaniment has also returned to the texture. The first movement of No.6 is a study in complex rhythms, with some structural elements worked out with computer assistance; texturally and harmonically it resembles its immediate predecessor. The following movements, though, chart a progression toward more conventional rhythm and harmony, and this is confirmed by the final quartet, tellingly titled Back Home, a return to a warmly neo-romantic idiom. 2 CDs.