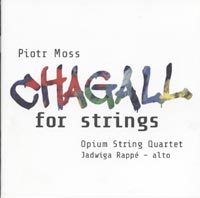 Description: The Chagall quartet, rather than portraying specific paintings, offers a musical evocation of aspects of the artist's distinctive style, the recurring imagery and motifs in his work. Russian, and especially Russian-Jewish folk references abound throughout the quartet's five movements. The overall vocabulary is not dissimilar to that of Bartók, though echoes of Shostakovich are also apparent. The Chagall images are unmistakable; folk gatherings, eloquent and exultant fiddlers, the juxtaposition of the graceful and the grotesque, the earthy and the fantastical, deep melancholy and joyous celebration. 'The Link between the Days' sets poems by the Belgian poet Miriam Van Hee. These fragile texts, treating subjects of loneliness, need and subtle, resigned despair, appear in three of the six movements, punctuated by instrumental interludes which elaborate on the mood of the poems. The central poem is a stylized, sad waltz, and throughout the work suggestions of faded memories and the inexorable ticking of time contribute to a melancholy, elegiac atmosphere. Texts and translations included. French-English texts. Jadwiga Rappé (mezzo), Opium String Quartet.