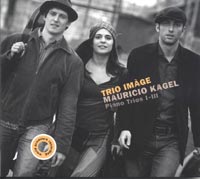 Description: These trios, like so much of Kagel's output, are "music about music", exploring the contemporary musician's relationship with inherited tradition. Unlike his instrumental theatre works, with their extramusical performance components, these are played as purely musical compositions, notwithstanding some inventive extended performing techniques. They form a kind of cycle, examining different facets of the underlying theme, though the relationships between the divergent layers, the cryptography of musical meaning, becomes more subtle in successive works, making them easier to accept on their own terms. The First consists of short, wildly contrasting sections, arranged in three movements. Very tonal, and harmonically and melodically familiar sounding, the music seems to constantly be asking inconvenient questions, like: Have you ever noticed just how repetitive Schubert is? After all that strenuous striving, could we actually arrive at some sort of conclusion? Look how easily Romantic high tragedy could descend into bathos! Isn't there something faintly ridiculous about a formal, classical ensemble pretending to be a dance band, or a jazz band, or a rock band? This process is accomplished with great subtlety; a thoroughly effective nocturnal passage lasts just a little too long; a tragic soliloquy seems just a bit too insistent; the sudden intrusion of a stylistic mismatch sounds as though somehow the musicians had turned over two pages at once. Sometimes the straightforward tonal harmony is abruptly subverted by the appearance of quarter-tones, or a sudden, arbitrary-sounding change in instrumental technique. The thing that makes all of this work - as commentary, satire or philosophical examination - is that it also works extremely well as music; any given passage is a fine, skillful and convincing example of its type, effectively eliciting its intended emotional response as any good music would. Only in their juxtaposition into a complete work do we realize eventually that we are seeing things behind the curtain that we're not ordinarily supposed to, or viewing the nuts bolts, glue, pieces of string and sealing wax that hold pieces together in ways that are usually hidden. All three trios, though, have a further underlying layer of meaning; a good deal of their effectiveness derives from the fact that they are quite sincerely expressive of deep emotion - dedications to the victims of 9/11, and autobiographical premonitions of the composer's own death (in the 3rd Trio, written a year before the - not unexpected - event took place). This, ultimately, is what makes the pieces so compelling, so much more than a clever intellectual game, and forces the listener to pay attention to the questions they raise. Trio Imàge.