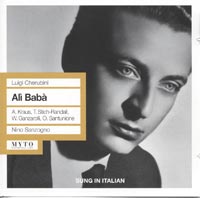 Description: Remember the DVD we offered in July of 2012 Koukourgi (07O040)? It was incomplete when Cherubini left it in 1793 and completed for that world premiere recording. Well, in 1833, the composer went back to it, taking four pieces from it and reworking the libretto to produce Alì Babà. This performance has previously appeared both on Nuova Era and its "Memories" sub-label. 2 CDs. No libretto. Wladimiro Ganzarolli (bass-baritone), Teresa Stich-Randall, Orianna Santunione (sopranos), Alfredo Kraus (tenor), Orchestra and Chorus of Teatro alla Scala Milan; Nino Sanzogno (June 13, 1963).