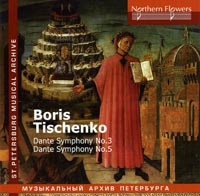 Description: Two more episodes from Tischenko's cycle of five symphonies comprising ten parts that illustrate in music Dante's 'Commedia', which occupied the composer between 1997 and 2005. As in the other Inferno symphony, the two-part Second (10K078), the Third, depicting the lowest three circles of hell, is a bold, garish, vivid statement, with the influence of Shostakovich writ large, but throwing just about everything else - sirens, breaking glass, you name it - into the mix. Basically, the piece is a huge representational canvas with avant-garde spatterings and splashes superimposed for additional shock effect. New to the catalogue is the culmination of the cycle; true to the text, this is not a happy ending, but in its depiction of the final parting from Beatrice and the approach to the inconceivable deity, the work recalls the tragic scope of the Purgatory and Inferno sections. The ascent through the heavens begins in somber, agitated Shostakovich mode, and much of the piece avoids entirely the excesses of the earlier works, rendering this one of the more coherent works in this vast cycle, with an emphasis on cyclic and imitative fugal structures which provide a sense of cosmic order after the chaos that preceded it. St. Petersburg Philharmonic Orchestra; Nikolai Alekseev.