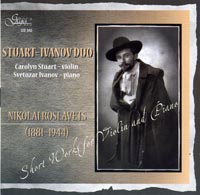 Description: There is a half-hour's worth of world premiere recordings on this Bulgarian disc from the University of South Florida (!): three very early works from student days, the Scriabinesque Poèms from 1910 and, after Roslavets had been stomped on by Soviet officialdom, two conservative, properly uncomplicated and easy to listen to short pieces (Poème romantique of 1929 and Nocturne of 1935) and a rather more chromatically adventurous Legend from 1941. This tendency also obtained in the Preludes of 1941-2, all of which were once available on a 1996 Olympia disc; these seven are the only game in town now. Carolyn Stuart (violin), Svetozar Ivanov (piano).