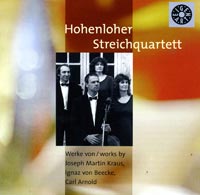 Description: Kraus' quasi-concertant quartet, from a group published in 1784 but dating from as much as 11 years earlier, has appeared on disc once or twice and the von Beecke quartet, composed around 1780 and very cognizant of Haydn's doings in the genre, may have been one of the three von Beecke quartets on an out-of-print cpo release from 1999, but the biggest work here is also the rarest: Arnold's 25-minute, four-movement quartet published in 1825. German-born but resident for most of his adult life in Norway, Arnold wrote this work in early Romantic style, simple melodic elements to the fore, with a nod to Beethoven in his scherzo-like minuet with its dramatic, recitative style. Hohenloher String Quartet.