MANFRED TROJAHN (b.1949): String Quartet No. 2 with Clarinet and Mezzo-Soprano. 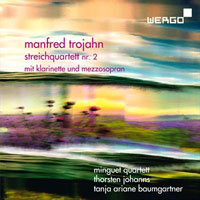 Description: This is a huge (about an hour) and hugely ambitious young man's work. During its composition in 1979/80 the composer went through several significant life experiences; he was achieving early recognition for his recent music; and he was searching for an idiom that embraced late Romanticism and Expressionism while acknowledging his student leanings toward the avant-garde. The piece has a convincing dramatic shape, improbably arrived at via the traversal of a wide range of styles. The large opening movement, marked 'restless', sets the scene for this drama of inner turmoil. Instrumentally challenging, the music is complex and intense, the most modernistic part of the quartet and broadly expressionistic in outlook, though not always active and angst-ridden; there are sustained episodes of stasis, and harmonic calm and repose. Eventually it gets 'stuck' on a repeated chord that winds down in tempo as though exhausted, followed by a brief coda. Three movements, the 2nd, 4th and 5th, add clarinet and voice to the ensemble, expanding on the example of Schoenberg's second quartet and in this case setting three examples of the melancholy, lyric romantic-expressionism of Georg Trakl. For these movements, Trojahn adopts a significantly different vocabulary, very reminiscent of late Mahler or early Schoenberg. The music of the outer songs is beautiful, but unsettlingly becalmed, expectant, and desperately sad, while the central, brief 'Der Schlaf' erupts in apparent panic. A grotesque scherzo, marked ‘Quasi funeral march’ but only intermittently resembling one in passages of stubborn rhythmic monotony separates the first and second vocal movements. A very Mahlerian mood of farewell pervades the final song, which is separated from the finale, which is actually titled 'Abgesang', by a tiny movement comprising a collage of individual bars from Beethoven quartets. This final movement brings together elements from throughout the piece, but only reminiscing at a distance, as it were, about the striving and strife of the opening movement, and settling increasingly into an elegiac mood before finally fading away over a prolonged ticking pulse. German texts. Minguett Quartet, Tanja Ariane Baumgartner (mezzo), Thorsten Johanns (clarinet).