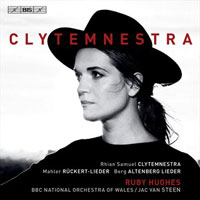 Description: Samuel's powerful drama in seven movements presents a more sympathetic view of Clytemnestra than is usually derived from Aeschylus' text. The work falls into two parts, the first depicting Clytemnestra ostensibly pining dutifully for her husband’s return, though with a disconcerting air of brooding anger, foreboding and pent-up violence; then the violence is unleashed in an orchestral movement 'The Deed'. In the final three movements, she eloquently defends the murder of her daughter’s murderer, lamenting the intolerable choice she had to make amidst her grief at her loss, culminating in an utterly desolate final 'Dirge'. Samuel's idiom is free but firmly tonal, and her writing for voice, as we observed of the chamber disc 08K097, is natural, lyrical and dramatic. This impressive large-scale work displays her craft and passion to the best possible advantage. Texts and translations included. Ruby Hughes (soprano), BBC National Orchestra of Wales; Jac van Steen.