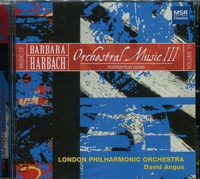 Description: Four succinct, three-movement symphonies, unashamedly programmatic and neo-romantic in style. The 7th paints musical portraits of three characters from Harbach's opera 'O Pioneers!' based on Willa Cather's novel of immigrant families in 1910 Nebraska, with themes of romance, tragedy and transformation. The first movement is heroic and conflicted, the second pastoral, the last transcends tragedy through the power of love. The composer's idiom is tonal, with a bracing, open-air Coplandish turn of phrase. The 8th is similarly structured around the principal characters of Hawthorne's The Scarlet Letter. A dramatic introduction leads to a depiction of the dignified, conflicted Hester, the sinister Chillingworth - "old-fashioned" musical gestures and restless, shadowy music; and the tormented Dimmesdale. The Celestial Symphony is based on material from Harbach's score for a silent film about the life of Christ. Serenity, joy, mystery and the drama of the temptations of Christ are depicted in vivid musical imagery. The 10th commemorates the tragedy of the city of Ferguson, MO. Spirituals, the Battle Hymn of the Republic, blues, rock and New Orleans jazz are woven into music of unrest, heroism and the hope for 'togetherness in harmony'. London Philharmonic Orchestra; David Angus.