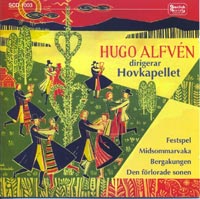 Description: Connoisseurs of early stereo will surely be interested in this. It only occurred to the owner of Discofil to make experimental stereo recordings a week or so before the scheduled session (and the session itself was interesting - Alfvén recorded Midsummer's Vigil on Oct. 7, 1954, 50 years to the day after its premiere performance) and a German company's stereo head had to be bought quickly, gotten to Stockholm and microphones scoped out and placed (two of them, 10ft. high and in the third row of the auditorium of the Large Hall of the Swedish Academy of Music). The Mountain King was recorded the same day and the Prodigal Son on May 6, 1957. For those of you practicing your Swedish, there's also a 12-minute interview with the composer made the day after the Midsummer Vigil recording. Royal Orchestra; Hugo Alfvén. 1994 release.