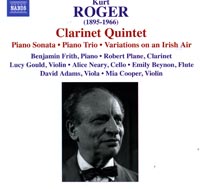 Description: An Austrian who studied with Guido Adler, Karl Weigl and Schoenberg, Roger was forced to emigrate in 1938 by the Nazi Anschluss and ended up in the U.S. where he became a citizen in 1945. He did not embrace dodecaphony, being naturally inclined toward lyricism but did learn from Schoenberg a sense of formal construction and the ability to create complex motivic conncertoins and dense polyphony. All the works here exhibit these features (less so in the Irish variations of 1948) with the very late (1966) clarinet quartet a gorgeous example of dark, poignant, nostalgic atmosphere whose modal harmoies suggest a quasi-pastoral nature. Any lover of late Romantic chamber music à la pre-atonal Schoenberg, Wellesz or, of course, Roger's teacher Weigl, will want to have this. Robert Plane (clarinet), Emily Beynon (flute), Gould Piano Trio, David Adams (viola), Mia Cooper (violin).